Squat myth – Knees should never go past your toes

Great blogpost by Tim Rowland where he dispells a myth about the squat! 🙂
You often hear physiotherapists tell their patients to not let their knees over their toes, because it puts more pressure on the knee joint.
When patients have anterior knee pain, putting more pressure on the knee joint is not the best idea.
As a general exercise like the squat and lunge, there is no problem with the knee going over the toes.
Your knee can handle a lot of load, so we don’t have to worry that you damage something in your knee by letting your knees go past your toes. 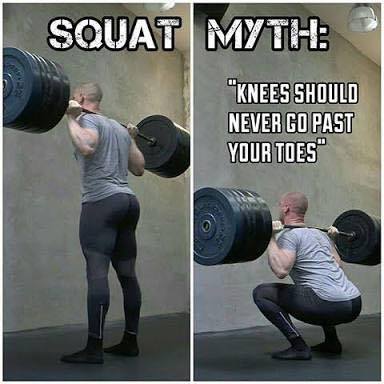 Tim Rowland is a physiotherapist and strength and conditioning coach from Sydney, Australia. He has completed a Bachelor of Physiotherapy graduating with First Class Honours in a project on shoulder screening in adolescent rugby players, and a Master of High Performance Sport. Tim currently works part time as a physiotherapist in a multidisciplinary performance-based practice, and as a strength and conditioning coach for a semi-professional rugby team and in a high school. Tim has a particular interest in exercise rehabilitation and strength and conditioning. He frequently shares posts on all things sports science and rehabilitation on his facebook page ‘Tim Rowland Athletic Performance’.

Knees should not go past the toes during a squat?

One of the biggest training myths out there is that the knees shouldn’t travel forward past the toes during a squat, otherwise your knees will explode… or something like that.

This myth, like a lot of other myths, likely started with an old study that was misinterpreted and this incorrect knowledge being passed down over years and years to end up with the false but widely held beliefs we have today – myths.

One such study that may have contributed to this belief was conducted in 2003 by Fry et al. (1), who looked at how joint torques at the knees and hips changed when restricting forward knee travel during a squat. As you can see in the picture below, in ‘A’ the knees were allowed to travel forward freely, whereas in ‘B’ they were restricted to not travel forward past the toes at all.

What they found was that by limiting forward knee travel it simply shifted the stress from the knees to the hips/low back. So while squatting with restricted forward knee movement showed a 22% decrease in knee torque, there was a 1070% increase in hip torque! This is a LOT more work for the hip and low back musculature to perform, and is a potentially more dangerous squatting method for the low back.

Therefore, while it is true that anterior knee stress increases as the knees come forward during a squat, it is important to know that the amount of stress from the knees going slightly in front of the toes is still WELL within the limits of what the knee can handle (2). Reference: Schoenfeld 2010.

Furthermore, in order to reach FULL depth in the squat the knees almost always have to move forward past the toes. Olympic weightlifters are a great example of this, as they need to train at full depth for their sport, and so often squat with their knees past their toes, and with very high loads too! 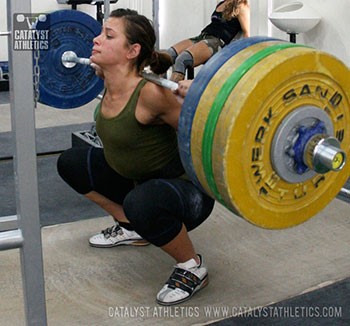 Caution – knees about to blow!!

This myth is also likely perpetuated by the popular ‘knees over toes’ cue, which actually means don’t let the knees collapse inwards or outwards and keep them in line with the feet. This is far more important to follow as it not only ensures efficient force transmission through the knee joint, but also, an inward collapse of the knee (or dynamic knee valgus) has been linked with ACL injuries, so it is likely not a good idea to encourage this movement pattern.

So don’t go expecting someone to have the same amount of forward knee movement in a front squat compared to a low bar back squat.

Hopefully now it’s pretty clear that there is no need to restrict forward knee movement altogether when squatting. However, it’s probably not a bad idea to limit ‘excessive’ forward knee travel to prevent undue strain on the patellar tendon and patellofemoral joint. And by excessive I’m talking knees being more than 15-20cm in front of the toes every rep in people that squat heavy and often. Note that there hasn’t been any research to quantify what is ‘excessive’, it is just a figure I have estimated from my own clinical experience.

Having said all of this, there are people who may benefit from limiting forward knee travel during a squat – those with anterior knee pain, i.e. pain at the front of the knees (3) Reference: Rudavsky 2014.
In this population reducing anterior knee stress may allow for more pain-free squatting. If this is you, I would recommend doing squatting movements that encourage less forward knee travel (or more vertical shins) such as box squats and the powerlifting squat or low bar back squat (4) Reference: Swinton 2012.

Hope this has shed light on this huge training myth. Happy squatting!