Great blogpost by Adam Meakins questioning the use of k tape! 🙂
It is always good as physiotherapists to be open to new ideas and to remain critical on your own clinical reasoning process.
After reading the blogpost, what do you think?

Adam is a specialist sports physiotherapist and extended scope practitioner with an interest in the management of the shoulder and upper limb. He works both within the NHS and private sector in various sites and locations around Hertfordshire.
Adam has been a shoulder specialist for over 10 years, and has worked in various settings, including elite level professional level football.
And in his own words: “I’m a critical skeptical controversial knobhead.”
Check out his website here. You can follow him on Twitter: @adamMeakins and his Facebook page here.
I am curious yet skeptical about most things in this profession, especially the things that are said to add to our ‘tool box‘, the so called ‘adjuncts‘ to treatment. However, in my experience, these often end up being nothing more than a waste of time, energy, and money, and more importantly they usually end up being found to be clinically ineffective.
One of the most common adjuncts I now see being used widely and liberally is this stretchy multi coloured Kinesio Tape or K Tape. A lot has been discussed, researched, debated and argued about K Tape, and I have had my fair share of these debates over the years. It has its staunch advocates, and its staunch critics, and it seems you can’t go a week without a new paper being published, showing how it fixes stuff, or how it doesn’t. However, after some more recent heated discussions on it, I thought it was time I added my two penneth and ask, is OK to K Tape?
What is K Tape?
Just in case you have been living under a rock for the last few years, I thought I have a recap of what K Tape is. K Tape in a nutshell it’s brightly coloured, sticky, stretchy, elasticated tape, thats designed to be worn for long periods. There are many different brands out there, and they all argue the toss other about whose is the best. They all seem to claim that their brand is better than any others due to its elasticity, stickiness or range of neon colours. They also all try and out do each other with sporty or sciency sounds names, terms and marketing, its all a little bit silly! 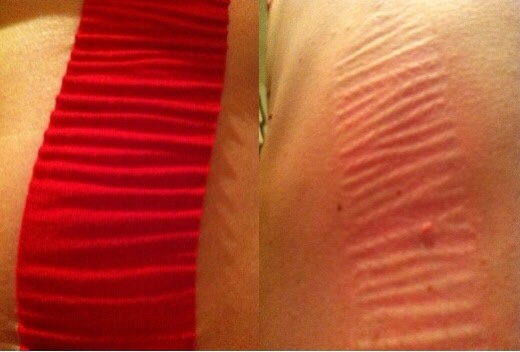 Anyway, regardless of the brand, colour, name etc, all K Tape has a wave or strip like adhesive backing that is the crux of its perceived uniqueness. This wave adhesive is believed to produce a lifting effect on the skin creating channels of less pressure underneath it, and is thought to help improve blood and lymphatic flow under the skin, as well as reduce pressure on nerves, muscles, tendons and ligaments, and mechanically stimulate skins mechanoreceptors.

This is claimed to improve sporting performance and prowess, helping muscles to recover and function better, stronger and for longer (this is even a brand of K tapes marketing logo). It also has been claimed to reduce swelling, bruising and pain after injury.

Is there any evidence?

Strong claims demand strong evidence, and to put it as succinctly as I can, and for the sake of brevity, there just isn’t ANY robust evidence to support ANY of these claims.
Now I am sure many will disagree (see the comments section soon) and they will start to throw research paper after research paper at me, telling me how wrong I am, and how this type of tape, applied this way, reduces this pain, or improves this condition, in this population, with this condition, etc, etc.

However, before you do start to post these papers in the comments section, the inconvenient truth for any K Tape believer, or even denier, is that for every paper that shows a positive effect, there is one that shows little or no effect. For every poorly designed, biased study claiming significant results, there is another showing none. Simply put, as with most things in the world of adjunct research, its all a bit of a mess, with no ‘clear’ answers either way. Even systematic reviews and meta analysis on K Tape cannot come to any firm conclusions, some for, some against. The phrase, more research is needed, seems to apply more than usual.

Ok, so new methods and treatments do need time to establish an evidence base and demonstrate effect sizes. K Tape has had plenty of time to demonstrate this.
It was first conceived by Dr Kase in Japan over 40 years ago, but, to be fair it has only been widely used in the west since the Beijing Olympics back in 2008. But that’s still plenty of time to build some evidence base and demonstrate its effect.
They haven’t.
And if they haven’t by now, they are in my opinion unlikely to in the future. If the effect of K tape was that strong we simply should have seen it by now, there simply should be ‘more’ conclusive, robust evidence. Not the confusing quagmire that currently exists. However I am sure that many K Tape advocates will continue to search for the pony for many more years to come.

Ok, before you all go bat shit mental in the comments section AGAIN let me explain a little more why I don’t think its OK to K Tape by sharing with you my own personal experience with it. I first came across K Tape in 2009 when working in football. A sales rep came to our club for a few hours, wowed us all with stories of the Bejing Olympics and athletes performing better, stronger, longer (there’s that logo again), he got the the brightly coloured rolls out, proceeded to demonstrate the applications on us and, BOOM, we where hooked, we ordered 100 rolls right there and then. I guess we were all a little more gullible back then, or rather just fucking idiots!

Anyway I did want to learn more about this K Tape stuff, so I went on an ‘official’ course. Now I won’t mention any brand names for obvious reasons, but I was amazed, although in hindsight not really that surprised, at the complete lack of research or evidence to back the bold claims that were, and still are, being made about K Tape.

However, I still thought it’s new, it needs time and there seems to be little harm or risk involved. So I gave it the benefit of doubt, and I started to use it over the next couple of years, both in professional sport and on the general public. I even tried it on my own aches and pains, and was even asked to do a couple talks on it, giving my own special, skeptical and cynical opinions. 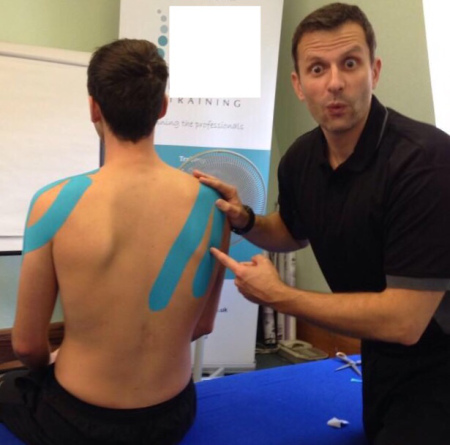 And I did find that patients and athletes liked this stuff, in fact everyone fucking loved it. Feedback was nearly always positive, with many saying they ‘felt’ it helped reduce pain or ‘felt’ it helped increase movement. However, as time went on, and the more I used it, the more I became to realise that the effects from K Tape were also extremely unreliable and extremely unpredictable. The only thing I could consistently say about K Tape was the effects were ALWAYS temporary, ALWAYS small, and more importantly K Tape was ALWAYS without fail a big huge fucking distraction.
So much so it became annoying for me to constantly have players and patients all giddy and amazed about this gawdy coloured sticky stuff I had just put on them, and it tended to distract them from focusing or paying any further attention to anything else I had to say, or ask them to do, which was always the more important stuff.

I also began to notice that some were becoming dependent on this bloody tape, just coming back to see me to have the tape re-applied, and not that concerned or attentive to any other parts of their rehab. Thats when I realised its NOT ok to K tape

So I don’t use it anymore

Not only have I stopped using K Tape, I have over the last few years stop using most other adjuncts completely, and have decluttered my metaphorical ‘tool box’. Actually I can say I have emptied it completely! My ‘adjunct’ list is now pretty much zilch, nada, nothing! No tape, no needles, no machines, no creams, no lotions, no clicks, no pops, no pokes!I even dislike the term ‘tool box’ and ‘adjunct’ as they continue to promote the idea that patients are objects that need, and can be, fixed by therapists. Read this by Jason Silvernail who also says the same.

You are not a true therapist!

Many often tell me that I am not a true Physio beacuse I don’t use tape, manipulate, massage or needle anything, and that I am not offering my patients all that is available. I think the exact opposite.
I feel more of a physio now than I ever used to. Free from the crap, bullshit and bollocks. Free from the clutter and confusion of ‘adjuncts’ and ‘tools’. Free to focus my time and attention on exploring movement and promoting activity and exercise. Free to offer my patients the one thing that matters the most… simple, straight forward, honest, advice and guidance.

It is liberating, it’s simple, it’s effective and it is enjoyable, it is everything physiotherapy should be!